A Slow Weekend in Washington, DC Slow Weekends is a travel series from Slow Food USA that highlights businesses that have been awarded the Snail of Approval award. This distinguished recognition is given to food businesses that make meaningful commitments to the environment, local communities, employees and purveyors, and advance justice and work to end oppression in food systems and beyond. Washington, DC is for Food (and Drink) Lovers

Sustainably sourced and locally-produced food and beverages may not be the first things that come to mind when thinking of Washington, DC, but locals know there are abundant opportunities to enjoy good, clean and fair products throughout our region. DC has long been home to advocacy and food justice movements that celebrate businesses doing things right – sustainably and equitably. Slow Food DC’s robust Snail of Approval program is a proud part of that community, continuously welcoming new chefs, bartenders, and food/farm businesses that make the DC-region a destination for food (and drink) lovers. Here’s how you might spend a weekend discovering a side of DC that doesn’t involve the typical National Mall or steakhouse experience.

FRIDAY
No visit to the District is complete without paying your respects to a Smithsonian museum. Located in DC’s Penn Quarter neighborhood, the National Portrait Gallery is a great place to take in a soothing sense of place. The museum’s collections narrate the changing landscape of the US through portraits of notable individuals, including the only complete collection of presidential portraits outside of the White House. Don’t forget to stop for a brief respite in the Kogod Courtyard, designed like a Roman atrium with a soaring glass ceiling that’s a piece of art all its own.

Afterwards, discuss the merits of the personages you’ve just viewed over dinner at Centrolina in the ultra-modern City Center complex. Chef-owner Amy Brandwein’s rotating menu of regional Italian food with a modern take emphasizes seasonal ingredients. Her dishes get a boost from Centrolina’s partnership with DC Urban Greens, an urban farm that plays a vital role in increasing the accessibility and affordability of fresh produce in underserved communities. For chefs looking to build similar sourcing relationships, Chef Brandwein told Food & Wine magazine that folks should get out into the community to build those relationships: “Go to your local farmer’s market. Once people see you’re willing to work with them, farmers know other farmers, and they can connect you.” 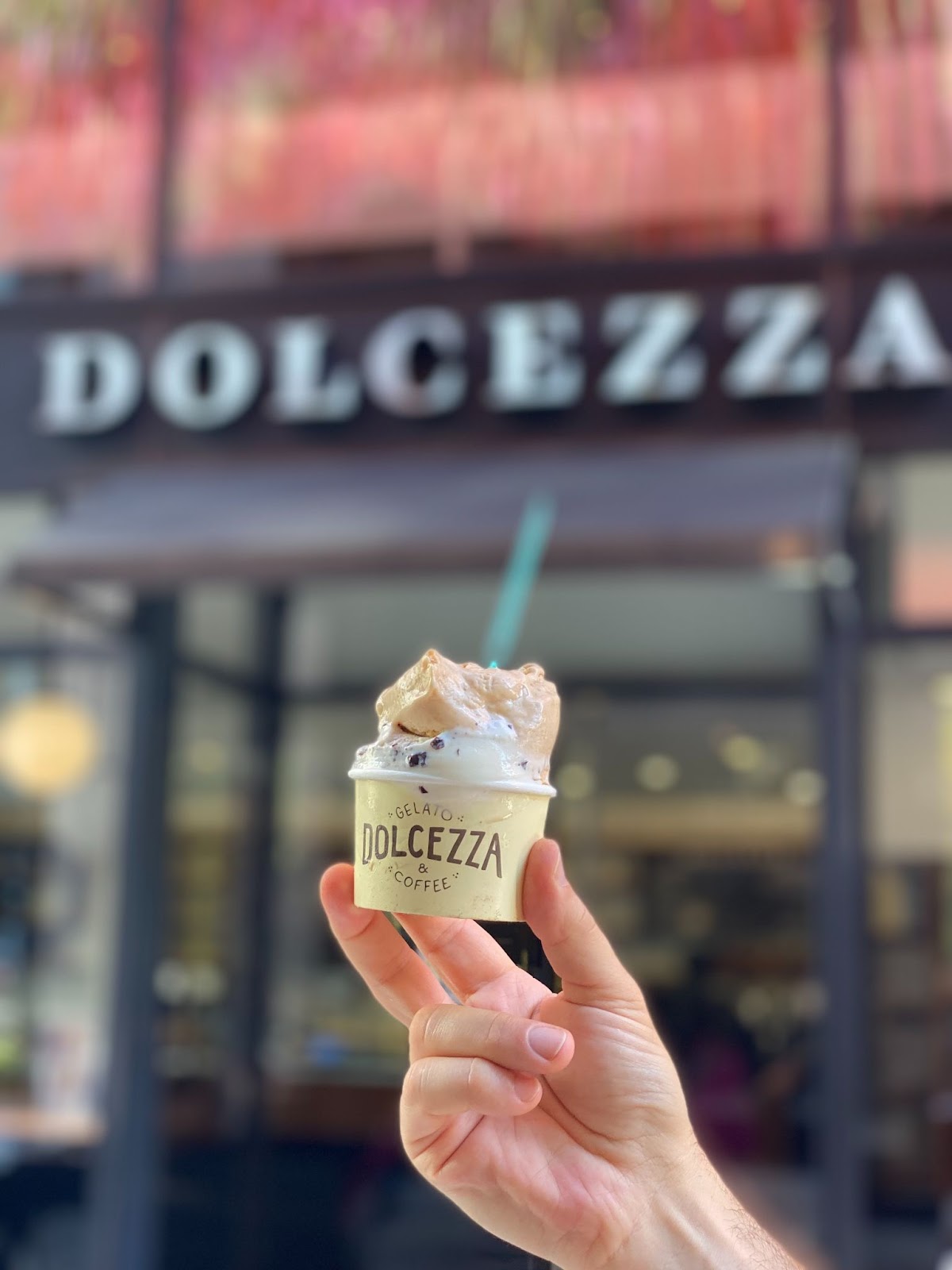 If your sweet tooth still needs satiating, grab a scoop (or two) at Dolcezza Gelato, just steps away at the edge of City Center. Founders Violeta and Robb Edelman use ingredients hand-selected at local farms to create a rotating selection of seasonal flavors that are always Snail approved.

Continue the Italian gustatory theme with an amaro nightcap from local distiller and Snail winner Don Ciccio & Figli at Free State Atlantic Bar in nearby Chinatown. This laid-back bar features libations from the Mid-Atlantic region, including other Snail of Approval winners DC Brau, Catoctin Creek, One Eight Distilling, and Republic Restoratives.

SATURDAY
You don’t need a reservation at the hottest restaurants in town to spot a celebrity chef in DC. Just check out one of the District’s FRESHFARM markets, a regional network of producer-only farmers markets that are the darlings of chefs like José Andrés and Nora Pouillon. Founded in 1996 by Bernadine Prince and Ann Harvey Yonkers, FRESHFARM promotes sustainable agriculture and improves food access and equity through a matching dollars initiative, FRESH Match. The organization’s FoodPrints program integrates gardening, cooking, and nutrition education into the curriculum of local schools. If you have the chance to visit DC in the fall, keep an eye out for Slow Food DC’s popular School Garden Bike Tour event, which welcomes visitors to a handful of school gardens, often including a FoodPrints garden or two, during Healthy Schools Month.

Spend Saturday morning with the locals by taking in the invigorating sights and smells of FRESHFARM’s H Street NE Market. Known as a community gathering point in a rapidly changing neighborhood, you’ll find small-batch, locally-roasted coffee from Zeke’s, fresh breads and pastries from Snail winner Atwater’s, and fresh fruit and snacks from a variety of farmers. If you need something stronger, Snail winner Number 1 Sons has all the fermented foods and beverages you could want to energize your day. Find an open bench or bring a blanket to enjoy your picnic breakfast at one of many parks in the neighborhood, some with views of the US Capitol. 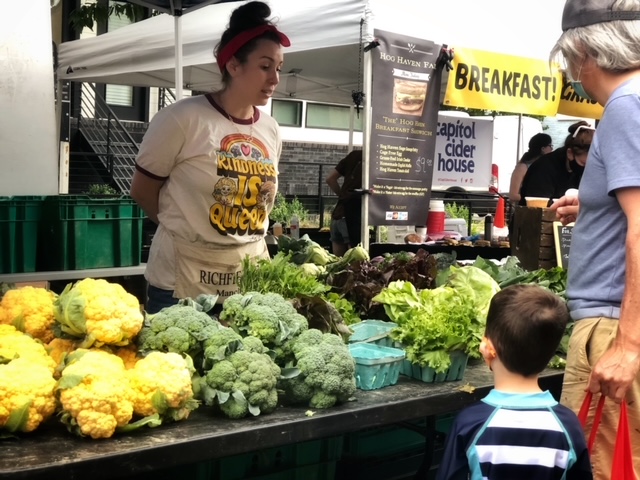 Keep the locally cultivated vibes going with a stop at Snail winner Cultivate the City’s rooftop urban farm just off of H Street, NE, and lend a hand during their Saturday volunteer hours (register in advance). Founder Niraj Ray’s mission is to educate, nourish, and cultivate community by providing access to gardening resources, plants, educational events, and classes. If you’ve been curious about vertical farming or thinking about growing your own microgreens, check out their events calendar to see what’s growing.

After you’ve communed with plants on the farm, check out the wild flora at the National Arboretum, one of DC’s hidden gems. Stroll around 446-acres of spectacular plant collections, including a museum of bonsai trees. Even if admiring plants isn’t your thing, it’s worth a visit just to get a look at the National Capitol Columns, 22 stoic Corinthian columns that once held up the dome of the US Capitol. Those with kiddos might enjoy a stop by the Washington Youth Garden’s one-acre Demonstration Garden on the grounds of the Arboretum. 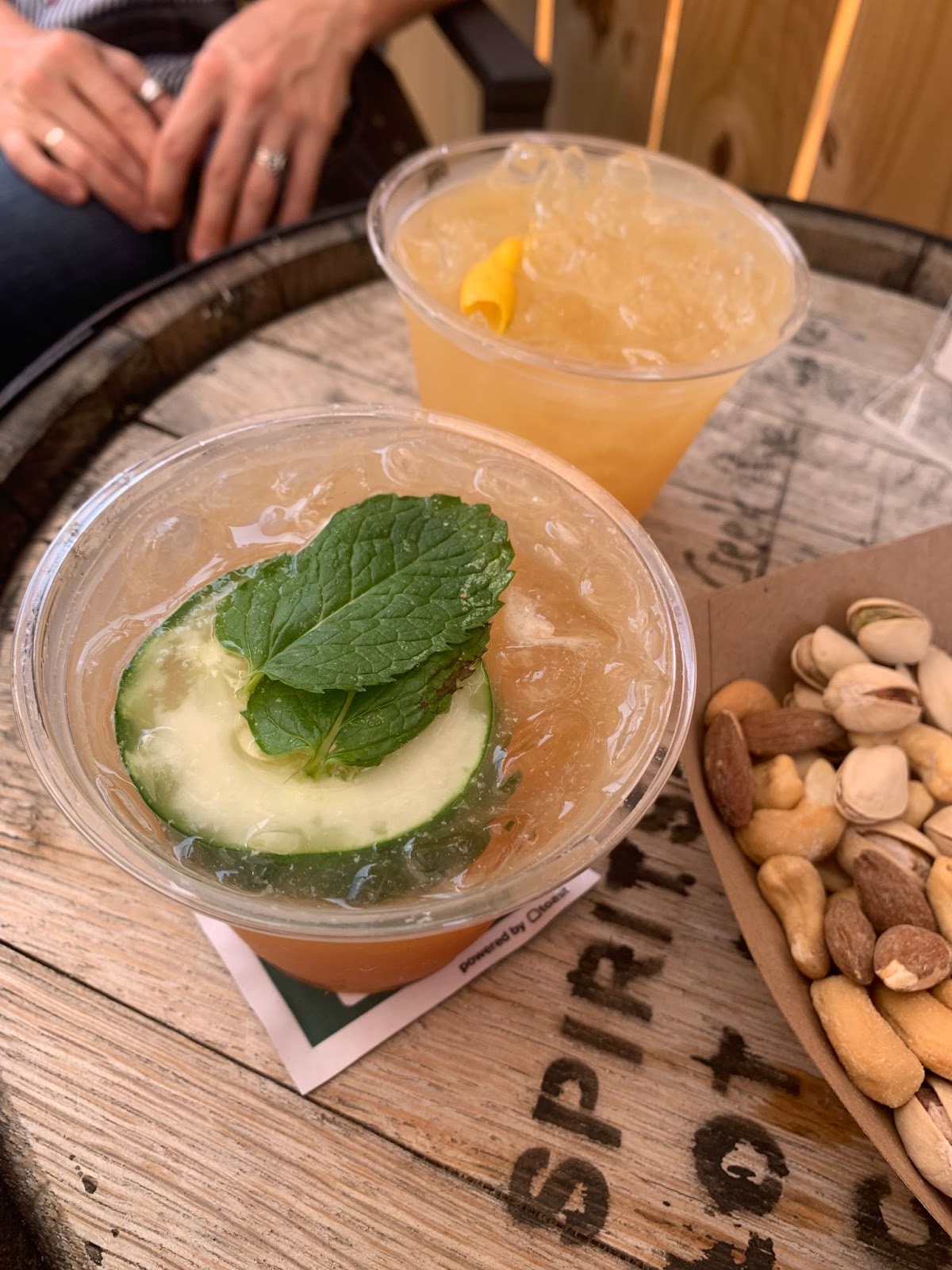 New laws legalizing distillation have sparked a small-batch distilling renaissance in the District. Stop by grain-to-glass distillery and Snail winner One Eight Distilling in the industrial-chic neighborhood of Ivy City for a private tour of where the magic happens, and enjoy a craft cocktail on the shaded patio. According to co-founder Alex Laufer, sourcing the best local grain and letting it “shine in the bottle” was a priority for the One Eight team from the start. “We want our spirits to support the ‘terroir’ of the mid-Atlantic,” says Laufer. The farms the distillery partners with in Maryland, Virginia, and North Carolina grow specific heirloom varieties for One Eight spirits. While Ivy City is still a bit off the beaten path, Laufer encourages visitors to “see a different side of DC,” where pride in “District Made” can be seen and tasted all around the neighborhood.

The concept of community supported agriculture (CSA) for produce is becoming more mainstream, but similar initiatives for fish and seafood are still in their infancy. As a founding member of Washington, DC’s Dock to Dish program, Executive Chef Kyle Bailey at Snail winner The Salt Line is bringing momentum to this movement. Closely aligned with the Slow Fish campaign, Dock to Dish is focused on producer-driven and hyperlocal sourcing and distribution, as well as ensuring profits go directly to those bringing in the catch. Enjoy a responsibly-sourced, seafood-focused meal influenced by the seasonal bounty of the Chesapeake. After dinner, take a stroll through the revitalized Navy Yard waterfront on the banks of the Anacostia River.

SUNDAY
Grab a car to Hyattsville, Maryland, a blossoming arts district a short drive from DC, for a leisurely brunch at the legendary Busboys and Poets. Artist, activist, and restaurateur Andy Shallal opened his first Busboys location in 2005, which quickly became a hub for Black, Indigenous and People of Color (BIPOC) activist communities, as well as a prominent destination for locally-sourced vegetarian and vegan dishes. Shallal has since expanded his restaurants to eight distinct neighborhoods across the Washington, DC region, as well as to nearby Baltimore. Whether you’re in the mood for a sustainably raised burger or a vegan scramble, Busboys and Poets has you covered. Browse the attached independent bookstore for a great new read for your journey home.

After brunch, stop in at the Riversdale House Museum. This Federal-period manor home and National Historic Landmark has an historic garden and orchard that hosts demonstrations of open-hearth cooking and foodways techniques from the early 1800s. If you opt for a house tour, be sure to spend time viewing the journal of Adam Francis Plummer, providing a rare, first-person account of the experiences of the enslaved individuals and families at Riversdale. Get some energy for the trip home at nearby Vigilante Coffee. Owner Chris Vigilante is strongly committed to sustainable and fair-trade coffee, personally visiting each of his suppliers and paying well above commodity pricing. And while you’re there, snag some locally-roasted beans and Vigilante swag to bring home as souvenirs.

Today's your last chance of the year to join Slow

Our auction 🤩 ends Saturday at midnight! We hav